ROSWELL AND CARLSBAD — At one end of Pauline and Joe Ponce’s spacious dining room in Roswell lies a cabinet crowded with photographs and mementos of their son, Michael. An old wrestling match program rests amid snapshots of Michael with his daughter, his parents, his wife.

Pauline lingers beside an image of Michael holding his then one-and-a-half-year-old son, captured in December 2017. “That was taken only two months before Michael died,” she said.

On the morning of Feb. 18, 2018, Michael Ponce, 39, was heading south on 285 near Malaga, a village 15 miles south of Carlsbad, in his white Dodge work truck. It was a Sunday, but like many oil field workers in the booming Permian Basin, to Ponce, who managed a truck fleet for Standard Energy Services, it was just another work day. It would be his last. At 7:22 a.m., a blue semi truck hauling fracking sand — used to help pry oil from fissures deep below ground — crossed the centerline, shearing off the rear wheels of another sand truck and then crashing head-on into Michael’s vehicle. Photos of Michael Ponce, who died in an accident on US 285 on February 18, 2018, crowd a cabinet in his parents’ dining room. April Reese / Searchlight New Mexico

Ponce and his passenger, co-worker Fernando Garcia Martinez, 60, died at the scene, according to the accident report.

Locals have a new name for the section of US 285 where Ponce and Martinez perished: Death Highway. In 2018, there were 49 crashes (20 involving a heavy truck), up from 31 crashes (15 truck-related) the year before. The deaths of Ponce and Martinez in 2018 followed four fatalities on 285 in 2017, tragic consequences of the biggest oil boom the Permian Basin has ever seen. While this “black gold” rush has turbocharged southeastern New Mexico’s economy and poured more than $2 billion into state coffers in 2018 — much of that going to New Mexico schools — it has also brought new dangers to the area’s small towns and rural farming communities.

Few people understand the boom’s dark side better than Pauline and Joe Ponce. A year and four months after the accident, they feel his absence every day.

“He was the kind of son who’d call 12 times a day,” his father said. How was breakfast, he’d ask. A little while later: How is your day going? Then: Come over for tacos tonight.

Over the past three years, the Permian Basin, which underlies southeastern New Mexico and West Texas, has become the busiest oil field in the country. Last year, in no small part because of the Permian, the U.S. edged past Russia to become the world’s biggest oil producer.

As the wells have multiplied, so have the risks.

Near the site of the crash, two white crosses stand in memorial to Ponce and Martinez. In handwritten letters on Michael’s is the word ‘mijito’ — my son. A steady stream of semi trucks rumble by, the worker bees of the Permian Basin’s big boom. The trucks haul all the essentials of an oil rush made possible by hydraulic fracturing: drilling equipment; the sand and chemicals used to break open the oil-rich rock of the boom’s namesake geologic formation; and some of the 4 million barrels of oil the Permian gushes each day.

The economic benefits are evident everywhere in this largely rural region — in the long lines at the local Chili’s and Starbucks, at the hotels where rooms that once cost $85 a night now go for twice that much, in the swift business at the local truck dealerships.

But the boom has also visited a host of problems on communities ill-equipped to deal with them. In just a few years, Carlsbad has morphed from a small town dominated by agriculture and tourism into a major oil and gas industry hub. Thousands of workers have arrived, drawn by the promise of good pay and steady work, and housing has become scarce and expensive. Farmers contend with semi trucks rumbling past their houses and fields seven days a week. Oil spills and air pollution have increased, and flares burn off methane, a potent greenhouse gas, day and night.

But the most visible — and immediate — danger is the traffic.

And it’s not just US 285. State Routes 31 and 128, part of an asphalt triangle that connects Carlsbad, Hobbs and Jal to the south, along with a sea of wells in between, also have become danger zones.

Timothy Parker, District Two Engineer for the New Mexico Department of Transportation, said that while heavy truck traffic has deteriorated road conditions, mistakes behind the wheel are largely to blame.

Still, rough roads, worn from overuse, add to the risk. Many of them in Eddy County — at 2.6 million acres, more than twice the size of Delaware — are rural farm and ranch roads designed for tractors and pickups, not 18-wheelers. The near-constant traffic has left large sections rife with potholes.

For local residents — especially those living in rural areas — the combination of congestion, roads thick with truck traffic, unsafe driver behavior, poorly maintained vehicles and deteriorating pavement can make even a routine trip to the farm supply store a white-knuckle obstacle course.

Craig and Teresa Ogden often see semi trucks rolling down the farm road at the end of their lane, some heading to the oil and gas wells that edge the hay and cotton fields that surround their house outside of Loving.

“Big trucks aren’t supposed to go down Higby Hole [Road], but they do,” said Craig Ogden, sitting in the kitchen of their brick farmhouse during a break from cutting hay on a Sunday afternoon. Until a flood wiped out a nearby crossing, the trucks would rumble right by the house, Teresa added. A culture of risk

Behind the stories and statistics lies a complex web of factors, many of which cannot be fixed by new asphalt.  Most crashes are caused by speeding, followed by failure to yield at intersections, people crossing the centerline to try to pass and driver inattention, according to a 2018 study by Molzen Corbin, an Albuquerque engineering and planning firm.

According to the accident report for the crash that killed Ponce and Rodriguez, the semi driver who hit them “was possibly using his mobile device and not paying attention to the road.”

Both truck drivers and long-time locals — frustrated by congestion and often unaccustomed to navigating heavy traffic — take risks they shouldn’t.

“In law enforcement, we stopped calling it an ‘accident,’ because the definition of an accident is something that cannot be prevented,” said Jeff Walker, a former police officer who teaches truck driver training courses at New Mexico Junior College in Hobbs. “We call them crashes, because in some form or fashion something could have been done to prevent it, whether it’s taking the time to make sure your truck is in good operating condition, or slowing down, or getting rest.”

The pressure to meet delivery timelines, along with the lure of a big paycheck — recent job ads promise up to $100,000 a year — make it all too tempting for drivers to speed and neglect truck maintenance, or fail to complain when their employer does.

“Those getting paid by the load or the mile are trying to make that extra money. So they’re in a hurry and they don’t check things they should on the truck and they get pulled over,” or have an accident, Walker said.

A scarcity of qualified drivers compounds the problem. Signs advertising for truck drivers are ubiquitous in Carlsbad and Hobbs. Oil companies are increasingly hiring drivers from outside the region and even outside the country, many from Mexico. Those new arrivals are not always prepared for the region’s narrow, congested, deteriorating roads.

“Some drivers who have come in from other countries may have experience trucking food on nice federal highways, but driving on federal highways is very different from driving on old farm roads with a lot of potholes,” said Currier, president of the Roadway Safety Integrated Project, a stakeholder group of people from industry, government, NMDOT, and local residents.

Then there are the demands of the job.

“I’m hourly, so I don’t mind getting stuck behind traffic jams,” said Andrew Hollis, a driver for Cudd Energy Services, a well maintenance company, as he filled up a semi truck at the Hobbs Pilot Travel Center on a recent afternoon. “But I know people who haul sand, and crude oil, or they’re delivering [fracking] chemicals — they might get paid by the load, and that might kinda rush them.”

“There’s just too many people for the roads we’ve got,” said Wayne Caldwell as he filled up his white Halliburton work truck.

Many drivers, though reluctant to speak on the record about the pressures they face in their jobs, share their frustrations anonymously on the internet, warning others about a culture of risk.

“Don’t count on home time in the permian basin,” a trucker posted on Reddit. “Been hauling frak sand for 3 months straight now without a day off. Get a couple of hours off for my 24 hr reset but for the most part most employers want you working 24/7.”

A vacuum truck driver based on the Texas side of the basin warned on the jobs site indeed.com that his company’s poorly maintained trucks almost guaranteed that “breakdowns are often.” 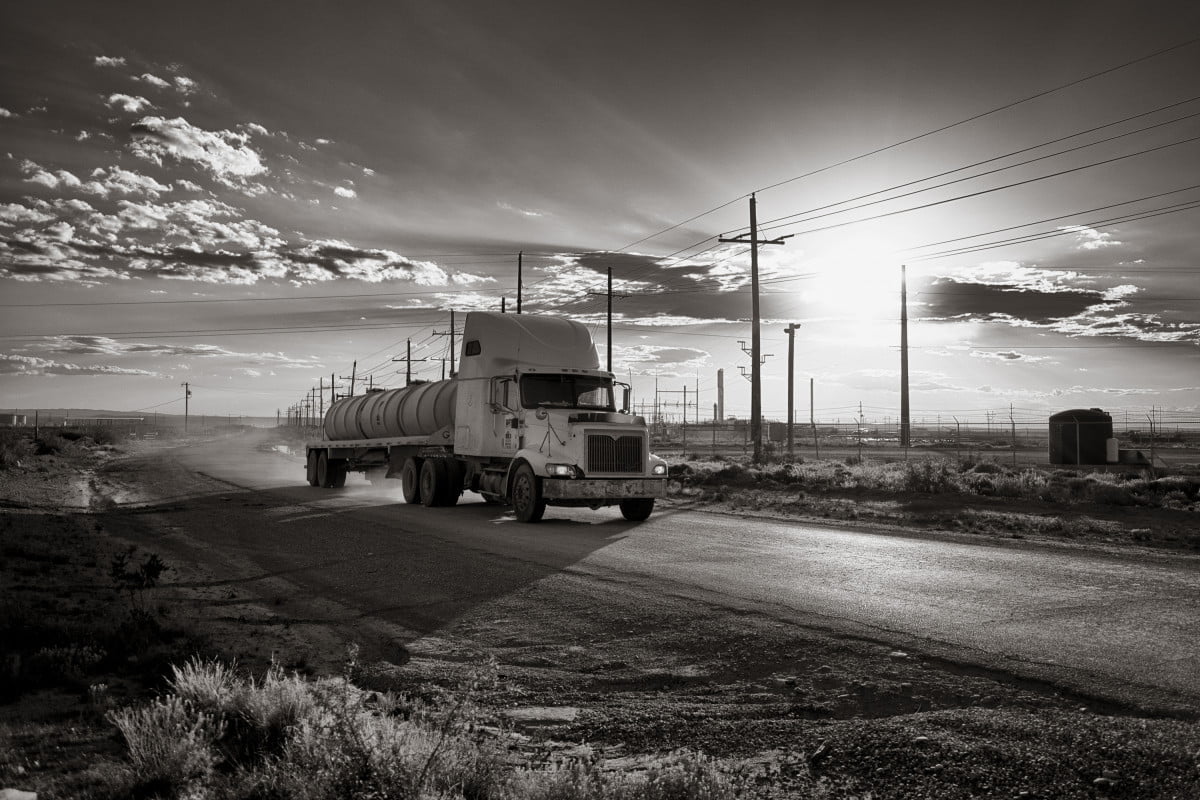 Paving the way to safer roads

Local and state officials have begun to work with industry and residents to come up with ways to make the roads safer.

A month after the crash that took the lives of Ponce and Martinez, transportation officials established an 18-mile safety corridor on that section of 285 to encourage drivers to slow down and keep their eyes on the road. State police increased patrols and doubled fines for speeding and other traffic violations. New LED signs warn drivers entering the corridor to drive safely.

By the end of the year, the state’s Department of Transportation will begin a $135 million project to rebuild that stretch of road. The project calls for adding turn lanes, widening lanes and shoulders, and filling potholes.

And Eddy County, partnering with Carlsbad and Loving officials, is considering building an overpass at the perilous intersection of State Road 31 and US 285.

But finding adequate funding for all the needed projects is a challenge. The state has dedicated $200 million for road improvements in the region, but that won’t cover all of the costs. Denied a $3.5 million planning grant from the U.S. Department of Transportation, the county is turning to private funders to make up the shortfall. Jeri Strong, oil and gas liaison for Eddy County, said officials hope to persuade several companies to commit $150,000 each to help pay for planning.

While such improvements are welcome, there’s a lot more state officials can do, said Pauline Ponce, who served as a state representative in the early 2000s. She wants to see the dangerous U.S. 285 corridor where her son died expanded from two to four lanes, with a concrete barrier in between — a more expensive alternative than the current plan calls for.

Recognizing the need to look beyond infrastructure projects for solutions, the Roadway Safety Integrated Project, which was instrumental in designating 285 a safety corridor, has launched a slick marketing campaign to try to get people to slow down and drive more carefully. Its radio ads play on the local stations, and billboards urge both truck and “everyday” drivers to pay attention and refrain from driving long hours.

Ponce is encouraged by the momentum that’s been building to improve road safety, but says it’s not enough. In addition to road improvements, she said, companies need to monitor drivers to make sure they get adequate rest and drive with greater care.

These days, she worries for another son, Joseph. He works for Standard Energy Services, just like Michael did. And he’s always on the road, just like Michael was. Joseph often has to drive his white work truck down 285, past the place where his brother died.